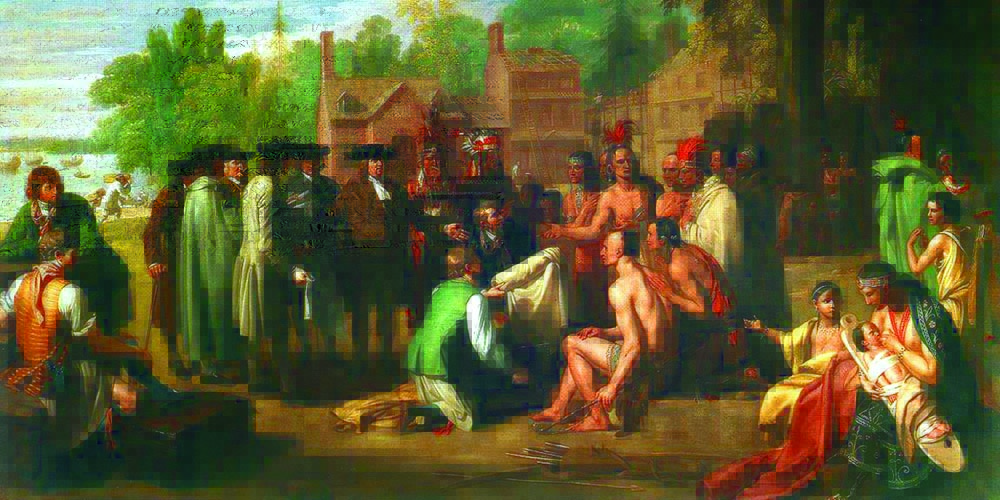 William Penn and the Quaker Movement

William Penn was born in London on October 14, 1644, to a prosperous English family. Even from his grammar school days, young Willy took a great interest in religion, but couldn’t find anything that suited him. From grammar school, he went to Oxford University, entering Christ Church College at the age of 15. While at Oxford, William went to hear Thomas Lowe, a Quaker, who had been preaching about the Society of Friends, a new church with new ideas.

This had a dramatic impact on William Penn, who took great interest in the new ideas that the Society of Friends brought to the table. However, William was still a nonconformist, and he resented the strict discipline that was inflicted upon him at Oxford. Eventually, he was expelled for “ejecting the surplice and rioting in the quadrangle.” Whatever “surplice” means, William’s father was furious at him, and sent him off to France in the hope of refining him. Well apparently it worked, and William ended up in Ireland at his family estate. While there, he once again met Thomas Lowe.

Soon, William Penn was active in the Quaker movement and befriended the founder of the church, George Fox. William even went as far as springing George from jail several times. Some say the term “Quaker” was actually developed because of one of Fox’s arrests. When he was in court defending against a blasphemy charge, he said, “Everyone should tremble and quake at the Word of God.” So the term, Quaker, was coined. Originally it was used as an insult, but the Quakers adopted the term in a “we don’t really care what you think” kind of way.

William Penn and the Story of Pennsylvania

Pennsbury Manor in Falls Township, Pennsylvania, is a reproduction of William Penn’s colonial estate, which like so many historical places, was lost through the ravages of time. The huge home sits on its original location, and offers deep insights into William’s personal tastes and habits. Back then, Quakers believed that each person was born with their inner light, or a small measure of God. They also believed that each person could experience their inner light by their daily actions, without the need of creeds, doctrines, and official theologies. They lived modest and simple lives, and the way they dressed and talked reflected that. Generally, Quakers didn’t believe in taking up arms and fighting, although some Quakers did participate in the Revolutionary War. They were called “Free Quakers” or “Fighting Quakers.” Betsy Ross was a Free Quaker.

On March 4, 1681, the King of England gave William Penn a huge plot of land southwest of New Jersey, which is actually the largest plot of land ever given to one person in North America. It appears that William had become disillusioned, and even disgusted, with the religious scene back in Europe, and the idea of a fresh start rejuvenated him. Even though William Penn had been arrested several times for being a bit too candid about his religious position, and Quakers weren’t necessarily welcome back in England because of their nonconformist and generally borderline treasonous views, the King allowed the Quakers to have their own province in the colonies. It was probably a way of getting rid of the Quakers and voiding a big debt owed to William Penn at the same time.

William Penn’s top priorities for his new land called Pennsylvania were personal freedoms, especially religious freedoms. Men and women of every religion were welcomed into his New World. This quote really sums up William Penn’s big plans for this new territory: “More was I drawn inward to look to Him, and owe it to His hand and power than to any other way. I have so obtained it and desire to keep it that I may not be unworthy of His love. God that has given it to me through many difficulties, will, I believe, bless and make it the seed of a nation.”

William Penn and the Quaker Movement