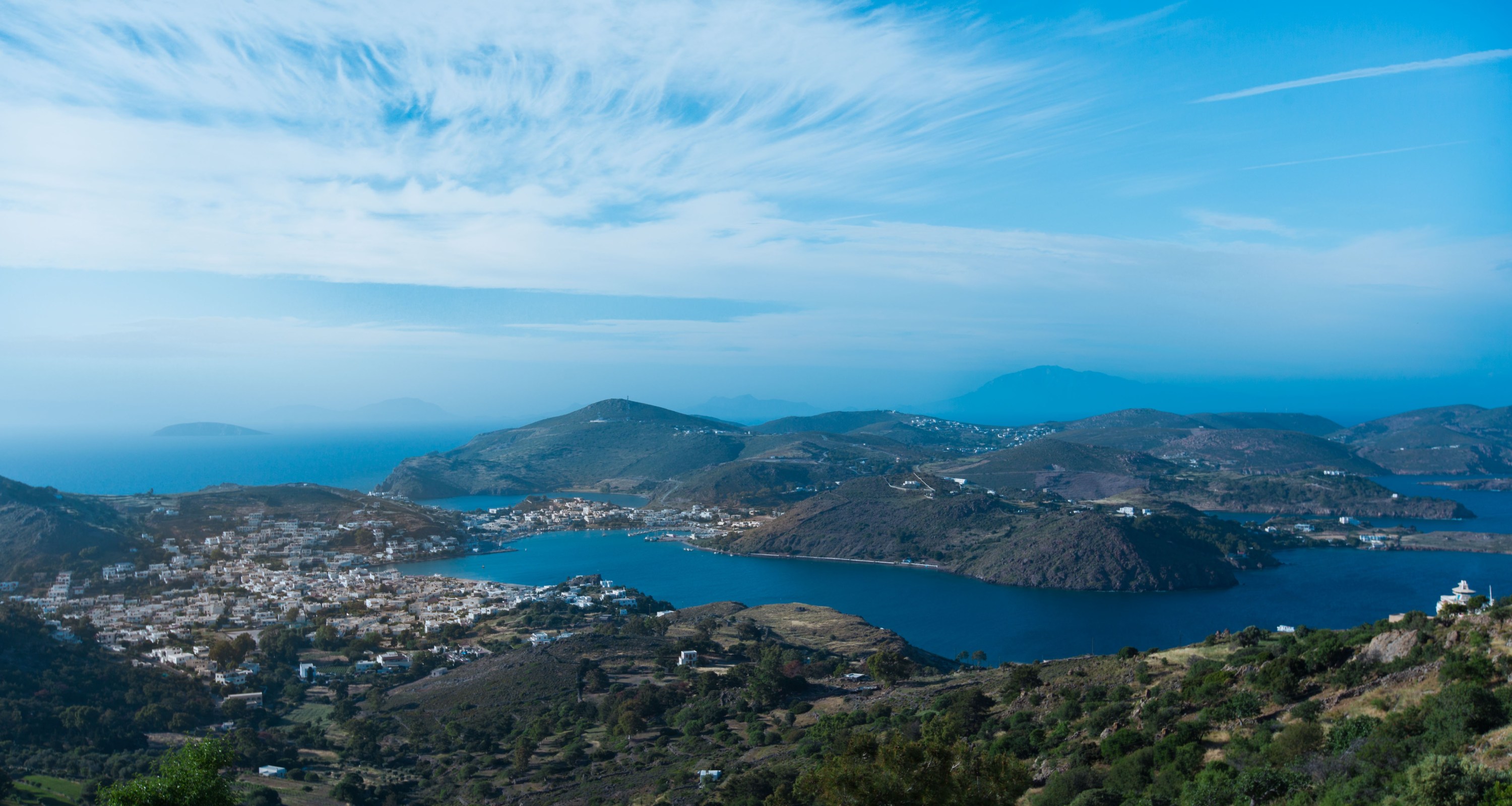 The island of Patmos is situated in the Aegean Sea in the eastern part of the Mediterranean, approximately 60 miles southwest of Ephesus and only about 40 miles west of Miletus off of the coast of Asia Minor/Turkey. The entire island, shaped like a distorted hourglass, is 7.5 miles north to south, and 6 miles across at its widest east west point, encompassing only about 13 square miles. The island was settled by Greeks migrating from the mainland, probably sometime during the 8th century BC or earlier. The earliest known mention of the island is found in the writings of the 5th century Greek historian Thucydides, but just as a geographical marker (Thucydides, History of the Peloponnesian War). According to ancient Greek mythology, the island of Patmos originally was underwater until Artemis persuaded Zeus to make the island rise out of the sea. In association with this legend, the island was named Letois in honor of the daughter of Leto, the goddess Artemis (Patmos Vera inscription). The later name, Patmos, may derive from Mount Latmos in nearby Asia Minor. Patmos is a volcanic island, so at one point in history it did “rise” out of the sea, with its highest point being 883 feet above sea level (Mount Elias). By about the 4th century BC, the town had a defensive wall and an acropolis.

In the Roman period, the island was known as part of the group of Sporades islands (Pliny, Natural History; Strabo, Geography). When sending a person off into exile, the Romans would often use remote islands, especially during the 1st and 2nd centuries AD (Pliny, Natural History; Tacitus, Annals). In particular, three other islands in the Sporades group, of which Patmos is a part, were named as islands utilized for exile (Tacitus, Annals; the islands of Donusa, Gyarus, and Amorgos). Roman Christians late in the reign of Domitian, even those of noble families connected to the Emperor, are known to have been banished to remote islands in the Aegean just as John was (Eusebius, Ecclesiastical History; Suetonius, Domitian; Dio Cassius, Roman History; cf. Domitilla, Flavius Clemens, and other Christians). In the Roman period, Patmos was not an uninhabited, deserted prison colony, but had a harbor, a town, a temple to Artemis (under the Byzantine church), a temple to Apollo (Kastelli Acropolis), perhaps a temple to Dionysus (acropolis) and a temple to Aphrodite (on the coast, perhaps at Kalikatsou Rock), a gymnasium (2nd century BC inscription), and even a hippodrome/stadium (known from an inscription and Prochorus Acts, not excavated but perhaps located between Kastelli and the harbor). Orestes was supposedly the original builder of the Artemis temple on the island, the ruins of which are under the monastery (Patmos Vera inscription). However, Patmos was remote, and with John in isolation, he would have been unable to spread the Gospel, lead the church, or encourage the Christian community to avoid any participation in the worship of the Emperor.

It was because of his preaching of the Gospel, teaching of the Bible, opposition to the imperial cult, and his position of leadership within the Church, that John the Apostle was exiled or banished to Patmos in the 14th year of the reign of Domitian in 94 AD. Before banishment, the Romans often flogged or beat the accused. However, according to Tertullian, who lived only decades after John the Apostle was initially plunged into boiling oil while in Rome, but after surviving this ordeal, he was subsequently banished to Patmos (Tertullian; cf. also confrontation with Domitian in Acts of John). Revelation indicates that John had endured some suffering or tribulation, which could have been reference to torture before being banished, or to forced hard labor on the island (Revelation 1:9). As an elderly man over 80 years old at the time, it is unlikely that John was sentenced to hard labor, and therefore the physical persecution and isolated banishment were his likely tribulations. Emperor Domitian was described as a violent madman even by Roman writers, so the torture and execution of Christians by his order is fitting of his character and actions (Pliny, Natural History). Besides persecuting Christians, Domitian was also a frequent user of and believer in prophetic omens, and he was one of the few emperors who insisted on deifying himself during his reign (Suetonius, Domitian; Dio Cassius, Roman History; various imperial temples erected during his reign; coins minted by Domitian). The temple of Domitian in Ephesus, constructed about 86 AD or so, and the forced sacrifice to and worship of Domitian, would have certainly been denounced and refused by John, who lived at Ephesus. This opposition to the self-proclaimed deity of Domitian, in addition to the preaching of the Gospel, must have reached the ear of Emperor Domitian and prompted him to persecute and attempt to silence John by banishing him to an isolated island (Franz, “The King and I: The Apostle John and Emperor Domitian”).

It was on the island of Patmos that he received the visions and wrote the book of Revelation before being allowed to return to Ephesus once Nerva became emperor in 96 AD, since on his ascension Nerva released many people whom Domitian had placed on trial for treason and allowed those exiled under Domitian to return (Revelation 1:9; Irenaeus; Justin Martyr, Dialogue with Trypho; Tertullian; Clement of Alexandria; Eusebius; Jerome; Dio Cassius, Roman History; Acts of John). Church leaders who lived in the 1st and 2nd centuries recorded that John, the disciple of Jesus and an Apostle, was also the author of Revelation. However, in the 3rd century, Dionysus of Alexandria became uncomfortable with the literal reading of Revelation, and in order to discredit the book as canonical, he brought forth the suggestion that it was written by an ambiguous “John the elder” who did not have Apostolic authority (Eusebius, Ecclesiastical History). This idea has persisted for centuries, and often brought about questions as to the inclusion of Revelation in the New Testament.

The book contains letters to the 7 churches in Asia Province, starting with the port city of Ephesus where John the Apostle had lived, and tracing a semicircular highway route northeast, then southeast, reaching Smyrna, Pergamum, Thyatira, Sardis, Philadelphia, and Laodicea in geographical order (Revelation 2-3; McRay, Archaeology and the New Testament).

Located on a hill about 1 mile from the port, on the way to the town of Patmos, is the Cave of the Apocalypse, the supposed site where John received the “revelation” recorded in the book of Revelation. According to a copy of the 5th century Acts of John by Prochorus, John dictated the words to his scribe Prochorus, one of the 7 Deacons from Jerusalem (Acts 6:5; cf. Acts of John by Prochorus, different than the 2nd century gnostic Acts of John). However, no early reference to this idea has been found, and it seems unlikely with all the direct commands for John to write and his sentence of banished isolation that he dictated it to a scribe (Revelation 1:11,19, 10:4, 14:13, 19:9, 21:5). Currently, the oldest known manuscript of Revelation is P98, a fragment found in Egypt that dates to about 150 AD, placing the copy just over 50 years after the original composition of Revelation on Patmos.

Near the acropolis, the Grand Royal Basilica of John was an early Byzantine period church built in the 4th century to commemorate where John lived in exile on Patmos while receiving and writing Revelation. Before the church was built there, however, a temple to Artemis had been the religious focal point of the island, and an inscription related to this temple of Artemis was discovered in the ruins. Unfortunately, the church was destroyed during Islamic attacks on the island between the 7th and 9th centuries, but in 1088 a monastery was constructed over the remains of the church after the Byzantine emperor granted the island to Christodoulos Latrinos. Today, the ruins of the church are in the Monastery of Saint John the Theologian, about 1 mile from the Cave of the Apocalypse and 2 miles from the harbor. This monastery houses 82 ancient New Testament manuscripts, including parts of the 6th century Codex Petropolitanus Purpureus (abbreviated N) which contains the Gospels of Matthew, Mark, Luke, and John (the monastery also has manuscripts 1160-1181, 1385-1389, 1899, 1901, 1966, 2001-2002, 2080-2081, 2297, 2464-2468, 2639, 2758, 2504, 2639, and lectionaries), and a relic that the monastery claims is the skull of Saint Thomas, the disciple of Jesus. In the late 19th century, the monastery claimed to have the skulls of Philip the Apostle, Antipas the Martyr, Pachomios, James the Apostle, St. George, Stephen, and James the Persian. There are also legends of the relics causing miraculous agricultural recoveries on Samos and in Smyrna.