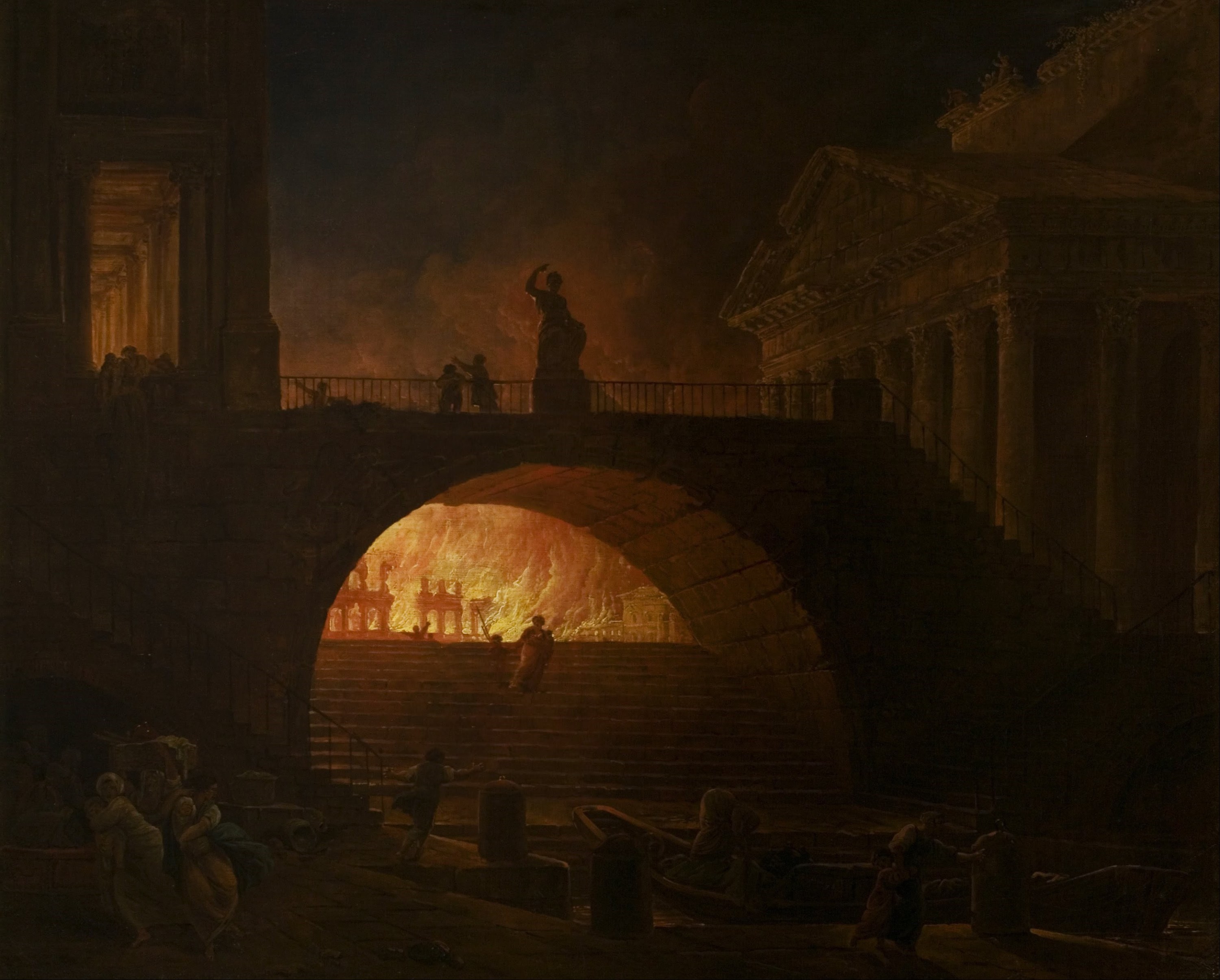 The Great Fire of Rome broke out on July 18, 64 AD. Rome had endured fires before, but this was the worst in its history. The historian Tacitus says the fire began at the east end of the Circus Maximus, at the foot of Palatine Hill. After about a week, the raging fire consumed 10 of Rome’s 14 districts – nearly three-quarters of the entire city. There were countless dead and an estimated 200,000 homeless.

There were reports that those trying to fight the fire were prevented from doing so. Many said this came on orders from the Imperial Palace. In the end, rumors started to spread that Nero himself was responsible for burning Rome, so that he could rebuild it in his own glorious image. According to the ancient historian Tacitus, this is when it got really bad for the Christians.

Consequently, to get rid of the report, Nero fastened the guilt and inflicted the most exquisite tortures on a class hated for their abominations, called Christians by the populace. Christus, from whom the name had its origin, suffered the extreme penalty during the reign of Tiberius at the hands of one of our procurators, Pontius Pilatus, and a most mischievous superstition, thus checked for the moment, again broke out not only in Judaea, the first source of the evil, but even in Rome, where all things hideous and shameful from every part of the world find their centre and become popular. Accordingly, an arrest was first made of all who pleaded guilty; then, upon their information, an immense multitude was convicted, not so much of the crime of firing the city, as of hatred against mankind. Mockery of every sort was added to their deaths. Covered with the skins of beasts, they were torn by dogs and perished, or were nailed to crosses, or were doomed to the flames and burnt, to serve as a nightly illumination, when daylight had expired. Nero offered his gardens for the spectacle, and was exhibiting a show in the circus, while he mingled with the people in the dress of a charioteer or stood aloft on a car. Hence, even for criminals who deserved extreme and exemplary punishment, there arose a feeling of compassion; for it was not, as it seemed, for the public good, but to glut one man’s cruelty, that they were being destroyed.

In addition to throwing Christians into the arena to fight beasts such as lions, bears and wild dogs, Nero crucified them and burned them alive, using them as human torches to light the city at night. The worst persecution of Christians to this point in history had started. Unimaginable cruelty would now spread throughout Rome and the rest of the Roman Empire.

Although the Great Fire of 64 AD severely damaged the structures on Palatine Hill, it also cleared a huge amount of space in the city. This allowed Nero to construct a new gigantic palace complex, complete with an artificial lake and gardens that occupied at least 100 acres in central Rome. This new palace of Nero was called the Domus Aurea (the “Golden House”) due to its over-the-top decorations of gold, jewels, ivory, marble, and a revolving ceiling. Outside the main entrance to the palace complex was a huge, nearly 100-foot, bronze statue called Colossus Neronis (“Colossus of Nero”), which towered over the area and portrayed Nero as a god.