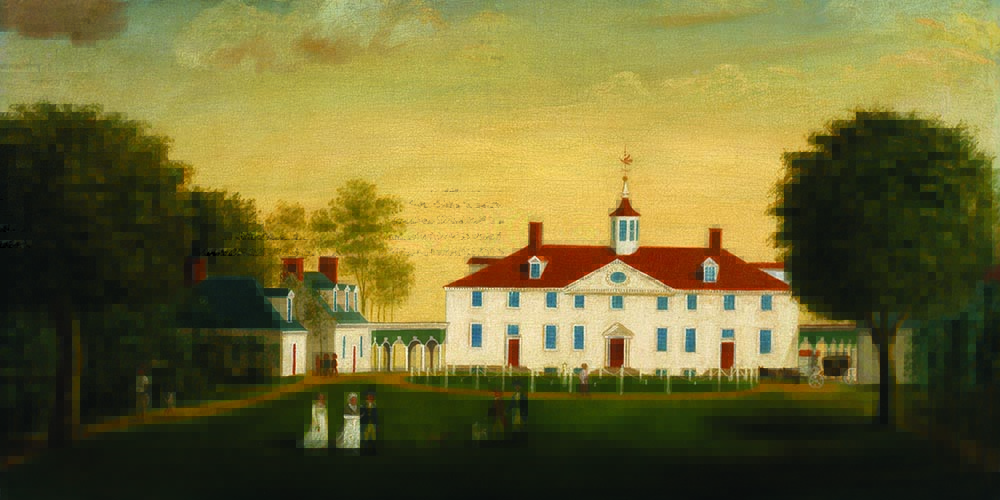 Mount Vernon was the estate of George Washington, the first President of the United States. It is an incredible property above the Potomac River in Virginia, now restored and open to the public. Mount Vernon was built in the neoclassical English Georgian style, but with enough originality and innovation to make George Washington’s home truly American.

Mount Vernon was first owned by George Washington’s half-brother, Lawrence. Lawrence was a commissioned officer in the British Marines. He named the property “Mount Vernon” in honor of his commanding officer, Vice Admiral Edward Vernon. Admiral Vernon, affectionately known as “Old Grog,” was considered to be one of the greatest military heroes of the age. When Lawrence returned from military service and got married, he started expanding Mount Vernon from its original farmhouse.

After Lawrence’s untimely death, George Washington inherited Mount Vernon. It became George’s beloved home and his ticket to be part of Virginia high society. When Washington inherited the property, the farmhouse consisted of just four rooms. The process of enlarging and improving the house began in the years before Washington’s marriage to Martha.

In 1759, George Washington raised the Mount Vernon farmhouse an extra story and extensively redecorated the interior. The north and south wings of the house were started just before the Revolutionary War. The enormous dining room on the far north end was completed just after the war.

The Story of George Washington’s Expansion

During the Revolutionary War, the British threatened to destroy Mount Vernon since George Washington was off leading the American troops. However, the caretaker of the estate, Lund Washington, a distant cousin of George, cut a deal. In exchange for the British not burning the place to the ground, Lund delivered some hogs, sheep, and “an abundance of other supplies.” In addition, 17 slaves left Mount Vernon to join the British cause.

When George Washington later heard of the deal, he was furious. Here’s a portion of the letter he sent to Lund:

It would have been a less painful circumstance to me to have heard that in consequence to your noncompliance with their request they had burnt my houses and laid the plantation in ruins. You ought to have considered yourself as my representative and should have reflected on the bad example of communicating with the enemy.”

After the war, George Washington transformed the modest wood exterior of Mount Vernon through a process known as “rustification.” He replaced the original plain wooden siding with beveled edge pine blocks. They were coated with a mixture of paint and sand to give a faux stone finish. Washington then added one of the mansion’s most recognizable features – a stunning two-story porch overlooking the Potomac. Here, family and guests would gather in warm weather to enjoy the breeze off the river.

On top of the house was another of Washington’s additions, a cupola serving both a decorative and practical purpose. The cupola brought light into the house, and with its windows open, helped cool the place on hot summer days. The final crowning touch was a ‘dove of peace’ weathervane atop the cupola.

In designing the estate, George Washington organized the buildings, lanes, and gardens to reflect both the practical and the aesthetic sides of his nature. He sought to organize a landscape that brought together beauty and functionality in a serene setting.

During his two terms as President of the United States (1789-1797), it is estimated that George Washington spent 434 days in residence at Mount Vernon. Today, the mansion has been restored to its appearance in 1799, the last year of George Washington’s life.