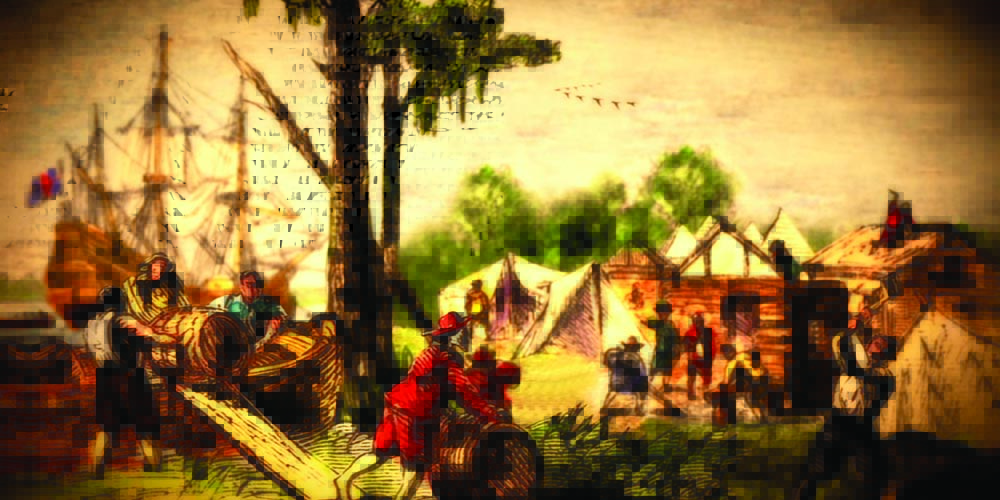 Here’s the story of Jamestown. Back in 1606, King James I granted a charter to a group of London entrepreneurs in order to establish an English settlement in the Chesapeake region of North America. These settlers sailed from London with the express purpose to settle Virginia, find gold, and search for a water route to the orient. However, only 104 survived the treacherous journey.

On May 14, 1607, 104 men and boys, along with 39 sailors, selected Jamestown Island to be their starting point for settling in the New World. They departed their three ships — The Godspeed, The Susan Constant and The Discovery — and named their new colony, Jamestown. It is regarded as the first permanent English settlement in America.

Almost immediately, Algonquin natives attacked the colonists. So one of the first priorities was to build a fort. In about a month, the newcomers constructed wooden palisaded walls in the form of a triangle around some homes, a storehouse, and a church. In recent years, archeologists discovered evidence of the original Jamestown walls.

The Jamestown settlers chose the site on the James River for a few reasons, but location was primary. It was on the end of a peninsula, surrounding the colonists with water on three sides, making it easy to defend. Sometimes the peninsula would even flood, making it an actual island. Another reason? The location provided a port, which would be valuable and essential to the settlement’s success.

Disease, famine, and continuing attacks from neighboring Algonquians took a tremendous toll on the Jamestown population, but there were times when the Powhatan Indians revived the colony with food in exchange for copper and iron implements. It also appears that the leadership of Captain John Smith kept the colony from dissolving.

The winter of 1609 was a starving time and only 60 of the original Jamestown settlers survived. That June, they decided to bury cannon and armor and abandon the town. However, the arrival of the new governor Baron De La Warr and his supply ships helped turn things around. The colony was reborn, but the suffering at Jamestown reoccurred for decades.

A tower is the only 17th century structure still standing at Jamestown, Virginia. It was part of the church that was built to replace the one burned in Bacon’s Rebellion. There is a memorial church building behind the tower built in 1907 that encompasses the ruins of churches dating back to 1617. The structure marks the location of the meeting place of the first representative assembly in the summer of 1619. This  “General Assembly” met in response to orders from the Virginia Company “to establish one equal and uniform government over all Virginia,” which would provide “just laws for the happy guiding and governing of the people there inhabiting.”

People have long recognized the importance of raising monuments to the glory of God and His many providential blessings, such as the 103-foot-tall Jamestown Tercentenary Monument.  It’s inscription reads:

Lastly and chiefly the way to prosper and achieve good success is to make yourselves all of one mind for the good of your country and your own, and to serve and fear God the giver of all goodness, for every plantation which our heavenly Father hath not planted shall be rooted out.”
-Advice of London Council for Virginia to the Colony 1606