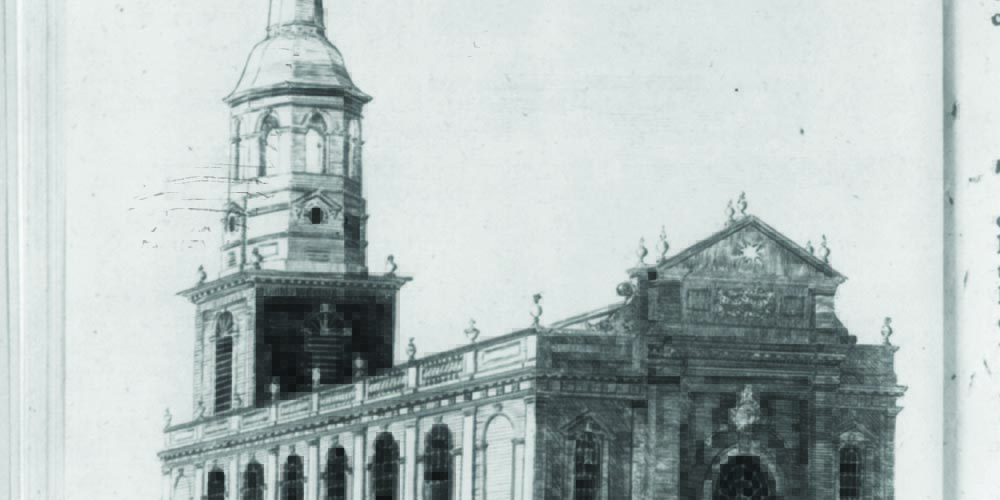 Christ Church was established in Philadelphia, Pennsylvania in 1695. According to many historians, no other church played a more significant role in the founding of the United States of America.

Christ Church was founded by members of the Church of England as a condition of William Penn’s charter. The church was the official “King’s Church,” the church that the Quakers had rejected because it persecuted them while they lived in England. Now, years later, the King’s Church was right in the middle of William Penn’s new Quaker colony. However, the Quakers embraced religious tolerance as a key tenant of their faith, so Anglicans and Quakers would live together as Christian neighbors.

Between 1695 and 1776, a visitor to Christ Church would have seen a number of royal reminders. There was a gilded crown on the steeple, an elaborately carved wood crest of King William III, a carved wooden coat of arms of King George III, and a wooden carving of King George II. Even the classic architecture was “royal in design,” which we now call Georgian, after King George.

Christ Church had a number of personal connections to the American Revolution. In fact, the construction of the steeple itself was financed by a lottery organized by Benjamin Franklin. The Christ Church steeple was the tallest structure in the colonies for 56 years.

By the 1770’s, Christ Church was a pretty volatile place. One side of the congregation was made up of ultra loyalists to the King, but the other side desired freedom from an oppressive tyranny. In 1774, Christ Church appointed a new pastor named Jacob Duche, who thought he could serve as a peacemaker to help prevent a terrible war. However, Reverend Duche was soon chosen to be the Chaplain of the first Continental Congress. At nearby Carpenter’s Hall, surrounded by the founders of the United States of America, Reverend Duche gave the first prayer of the Continental Congress, which revealed his chosen side in the brewing conflict:

O Lord our Heavenly Father, high and mighty King of kings, and Lord of lords, who dost from thy throne behold all the dwellers on earth and reignest with power supreme and uncontrolled over all the Kingdoms, Empires and Governments; look down in mercy, we beseech Thee, on these our American States, who have fled to Thee from the rod of the oppressor and thrown themselves on Thy gracious protection, desiring to be henceforth dependent only on Thee. To Thee have they appealed for the righteousness of their cause; to Thee do they now look up for that countenance and support, which Thou alone canst give. Take them, therefore, Heavenly Father, under Thy nurturing care; give them wisdom in Council and valor in the field; defeat the malicious designs of our cruel adversaries; convince them of the unrighteousness of their Cause and if they persist in their sanguinary purposes, of own unerring justice, sounding in their hearts, constrain them to drop the weapons of war from their unnerved bands in the day of battle.”

“Be Thou present, O God of wisdom, and direct the councils of this honorable assembly; enable them to settle things on the best and surest foundation. That the scene of blood may be speedily closed; that order, harmony and peace may be effectually restored, and truth and justice, religion and piety, prevail and flourish amongst the people. Preserve the health of their bodies and vigor of their minds; shower down on them and the millions they here represent, such temporal blessings as Thou seest expedient for them in this world and crown them with everlasting glory in the world to come. All of this we ask in the name and through the merits of Jesus Christ, Thy Son and our Savior. Amen.”

After the Revolutionary War, King George was out, so what happened to the King’s Church? The church became an Episcopal Church, which is still active today. Christ Church is also the location for daily talks and tours about the history of the church and the Old City neighborhood of Philadelphia.