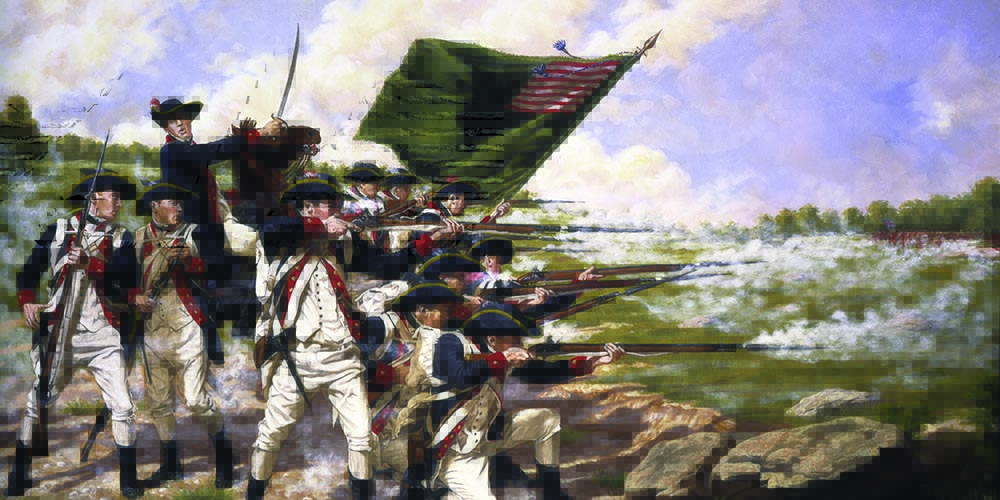 Battle of Long Island – An Important Clash in the American Revolution

The Battle of Long Island during the American Revolution doesn’t make many of the history books. However, it’s a great story of strategy, courage, and Divine Providence.

After defeats in Boston, the British Army and British Navy reorganized in Canada and moved out under new command. British General Sir William Howe replaced the disgraced General Thomas Gage. The new British strategy was to capture New York City, crush the American Army, and end the rebellion. Howe’s plan was to try negotiation first, and if that failed, attack New York with massive force. He had assembled the largest fleet of warships in the world and his brother, Admiral Richard Howe, was in command of it.

William Howe assembled over 20,000 experienced soldiers, both British troops and Hessian mercenaries. They were highly trained and equipped with the best gear of the day. George Washington had about 10,000 ragtag American troops of various experience levels, ranging from seasoned soldiers to just-off-the-farm.

Even after his victory at Dorchester Heights in Boston, George Washington was under no illusion about the difficult battle ahead. He rightly guessed that the next showdown was going to be for control of New York City. The battle terrain favored the British, because they had a navy, and there is lots of navigable water around New York. George Washington only had an army.

The main battle for New York took place on Long Island. In terms of the assembled manpower on both sides, most scholars agree that it was the biggest battle of the Revolutionary War. George Washington got to Long Island first and dug in with his troops. He faced the British Army under General Howe, the British Navy under Admiral Howe, and the Hessian mercenaries. Before the battle began, Washington addressed his troops and said:

The time is now near at hand, which must probably determine whether Americans are to be freemen or slaves; whether they are to have any property they can call their own; whether their homes and farms are to be pillaged and destroyed. The fate of unborn millions will now depend, under God, on the conduct and courage of this army… We have therefore to resolve to conquer or die…”

Battle of Long Island – A Miraculous Retreat for the Americans

The American Army was outnumbered by over two to one by a far superior, more disciplined military. The Battle of Long Island ended in a disaster with over 2,000 Americans either killed or wounded. Scholars argue that this could have been the end of the Revolutionary War, but the British made a mistake and did not finish the job. They decided to wait until the morning for the final attack.

That night, a drenching rain descended on Long Island. George Washington developed a secret plan for retreat that involved moving his nearly 9,000 men, canons, horses and carriages across a mile of river to safety on the other side. While rain muffled the sound of the retreat, fishermen and soldiers from Massachusetts shuttled boats back and forth in the hopes of moving every last man before sunrise. As dawn approached, there were still many Americans trapped on Long Island. Multiple diaries from the time recorded what happened next. Major General Benjamin Tallmadge wrote:

Those of us who remained in the trenches became very anxious for our own safety, and when the dawn appeared there were several regiments still on duty. At this time a very dense fog began to rise [out of the ground and off the river], and it seemed to settle in a peculiar manner over both encampments. I recollect this peculiar providential occurrence perfectly well, and so very dense was the atmosphere that I could scarcely discern a man at six yards distant… We tarried until the sun had risen, but the fog remained as dense as ever.”

The fog lifted and the British discovered that the entire American Army had vanished, as if by a miracle. Indeed, George Washington would also conclude that it was Divine Providence that saved the Americans at the Battle of Long Island.

Battle of Long Island – An Important Clash in the American Revolution